Saturday 18th Jan, clear blue skies but still not certain whether the match would be going ahead due as Storm Brendan was in full force in the days leading up to the match. It wasn’t until 11:30am when we heard that the match would go ahead. Excitement filled the atmosphere as it was our chance to get the double over our local rivals, Oxhey Jets Vets.

The SJFC line up was slightly different than usual due to a few injuries. A very rare 4-4-2 formation saw Captain Fantastic starting at the back along with Maisam Merali at CB. Mahdi Merali and Mahdi Hemraj at full back. The middle was to be controlled by Gibran and Abbasali with Murtaza and Maz on the wings. The question was where Yaseen was going to play as he is known for playing all positions but on this occasion he was given the go ahead to play up top alongside Amirali. 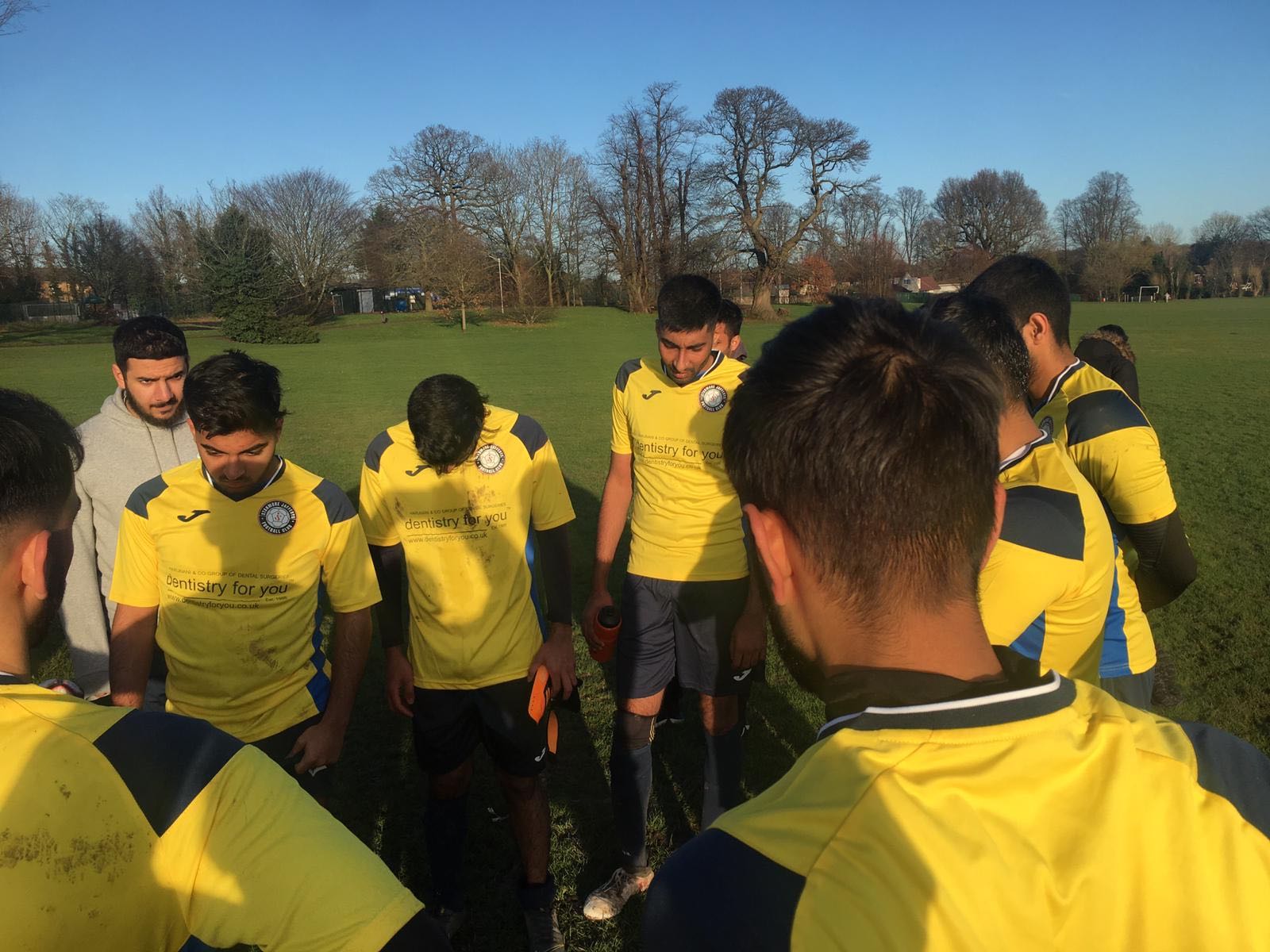 From kick off SJFC dominated possession and played their game. Oxhey Jets just could not keep up. This was highlighted by an absolute screamer from Murtaza Merali from around 25 yards out. He shifted the ball onto his left and straight into the top corner, something he’d practiced in training just a few days ago.

The chances kept coming, SJFC were unlucky not to be 3-0 up within the first 20 minutes. As well as showing promise when attacking, the SJFC defence was solid with the goalkeeper not having to do much except take a few goal kicks.

The constant attacking pressure by SJFC produced a corner which was excellently defended. However, the ball fell to Abbasali on the edge of the box which allowed him to deliver a low driven cross right into the path of Gibran who slotted the ball into the back of the net leaving the keeper with no chance.

The first half was filled with great passion from both sides. It was here when the passion turned into aggression with a late challenge on Maisam Merali which caused him to be substituted off at the end of the first half.

The second half began with a slight positional change with Mahdi Shabbir coming on as full back and Mahdi Merali, who seemed somewhat taller on this day after cutting his hair slotting into CB. SJFC tried to continue the momentum into the second half however it was a bit of slow start which allowed Oxhey Jet Vets to equalise from a corner. Pressures in the SJFC camp were mounting as there was only a 1 goal gap. 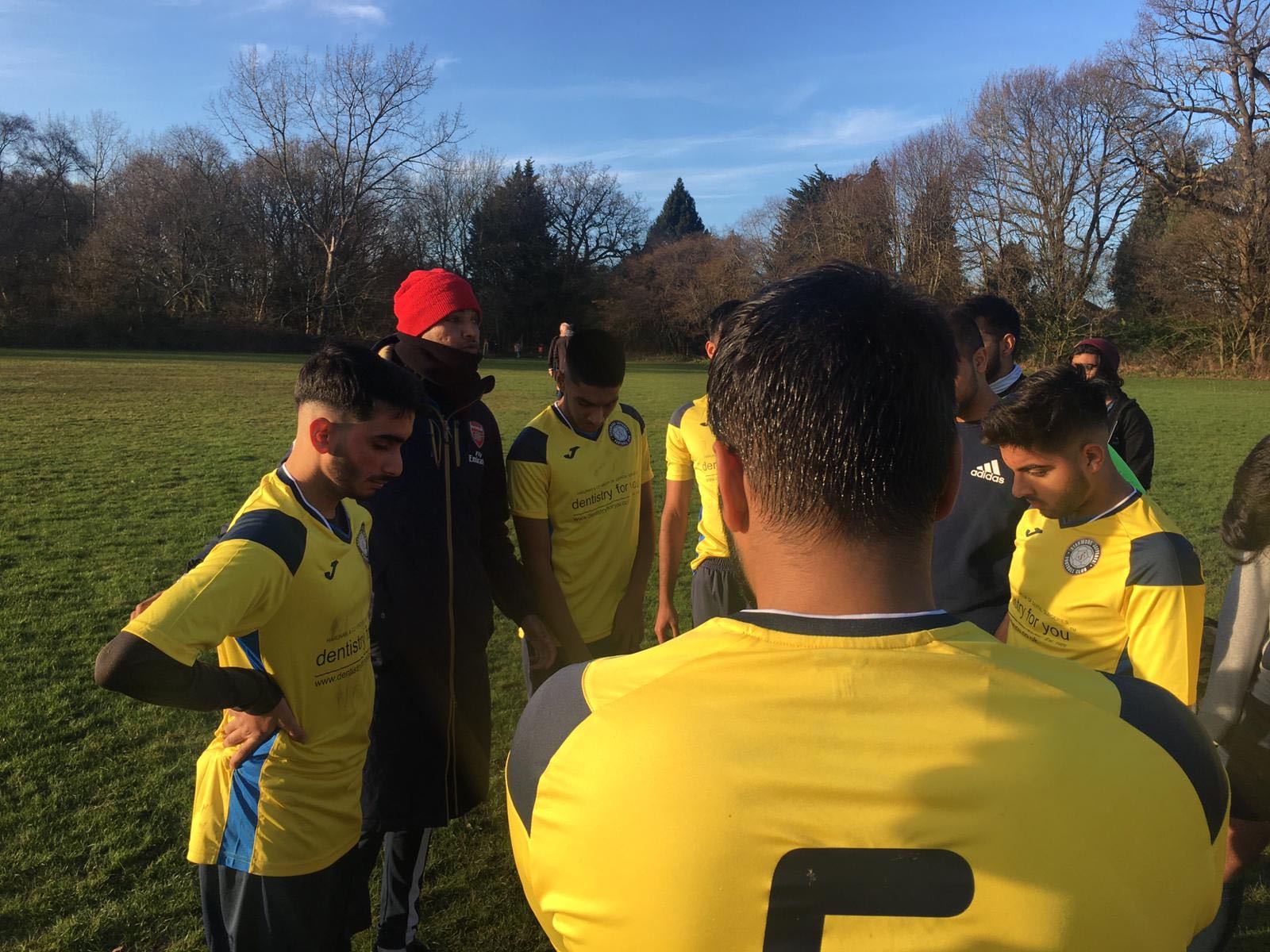 The team remained strong and continued to defend the lead despite the referee making odd decisions. One such decision, which was deemed soft was not received well by the skipper, Hussein Pirbhai making his feelings known to the ref. Instantly he was shown a yellow card and given a 10 minute sin-bin for dissent.

With SJFC down to 10 men, some might have even shouted 9 men with Amirali trying to find the strength to keep up the high press. 10 minutes felt like eternity but it was soon up with Hussein coming back into the game at holding midfield which made an instant impact. Abbasali received the ball at the edge of the box and floated it over the keeper and into the net, making the score 3-1. The fans were going crazy, Uncle Mo claiming the assist shouting “I KNOW WHAT I’M TALKING ABOUT.

“With just a few minutes left, Gibran found himself in a shooting opportunity and was able to slot in a shot leading to a fourth goal! SJFC heads were high and were able to see out the game. An incredible victory for SJFC, gaining the double over the Oxhey rivals. Unbelievable scenes.