Below is a chronological order of how our two SJFC teams performed during the Unity Games in Dubai. As a community we should be proud of their achievements which is an improvement from four years ago when both teams only reached the quarter finals. The two teams we took to Dubai consisted of players from the youth set up and shows that development is moving in the right direction. We can now say for sure that there is a natural pathway between the youth and the adult set up.

The two SJFC teams have kicked off on their Dubai travels. On Christmas Eve, Stanmore A dominated their first fixture against the Dubai Falcons but narrowly lost:

The goal came from a contentious penalty decision and converted by Dubai. 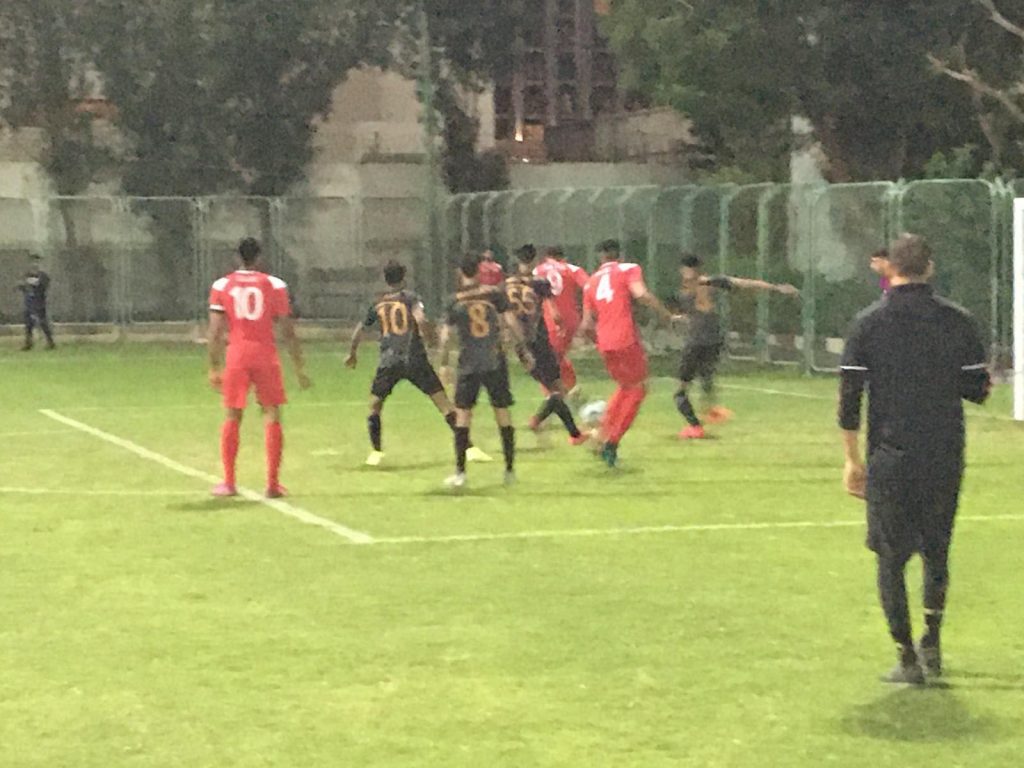 Stanmore B had a better start against their UK rivals, Husseini Leicester.

Stanmore dominated the game with Mahdi Shabbir hitting the woodwork four times in one game. The fixture is available to watch here:

On Christmas Day Stanmore A started on their winning ways with a comfortable 3-0 win against Gloucester A. The three goals coming from Amirali Merali, Mohammed Gulamhussein and Yaseen Valjy. The match link can be found here:

Stanmore winning ways continued on Christmas Day with the B team scoring their first goals in the tournament against Nairobi in a 3-0 win. The Stanmore goals coming from B Abboud, M Shabbir and A Jehta. Highlights of the match can be found here:

Christmas Day turned out to be a festive feast for Stanmore with the Stanmore teams completing a played 4 won 4 status by Stanmore B beating Dubai C 3 – 1.

On Boxing Day Stanmore B came out fighting but lost out to Dar Union Red by a 0-1 score line which was their first loss of the tournament. 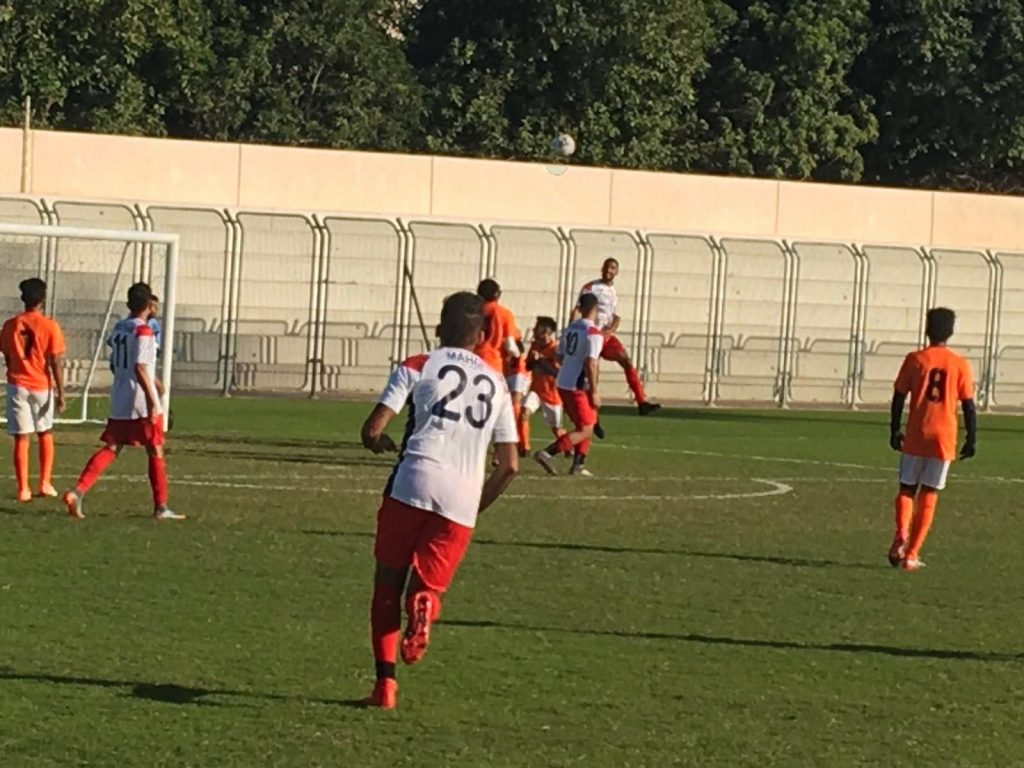 Stanmore A revenged B’s defeat by winning against Dar es Salaam B with a 2-0 score line to continue their winning ways. The scorers Maz Gulamhussein and Amirali Merali. The penalty by Amirali Merali can be seen here:

Later in the afternoon Stanmore B recovered well with a late goal against Madagascar 3. Ali Dharas scoring the wining goal.

In the evening kick offs Stanmore A drew out a tightly fought 0-0 with Madagascar 1. 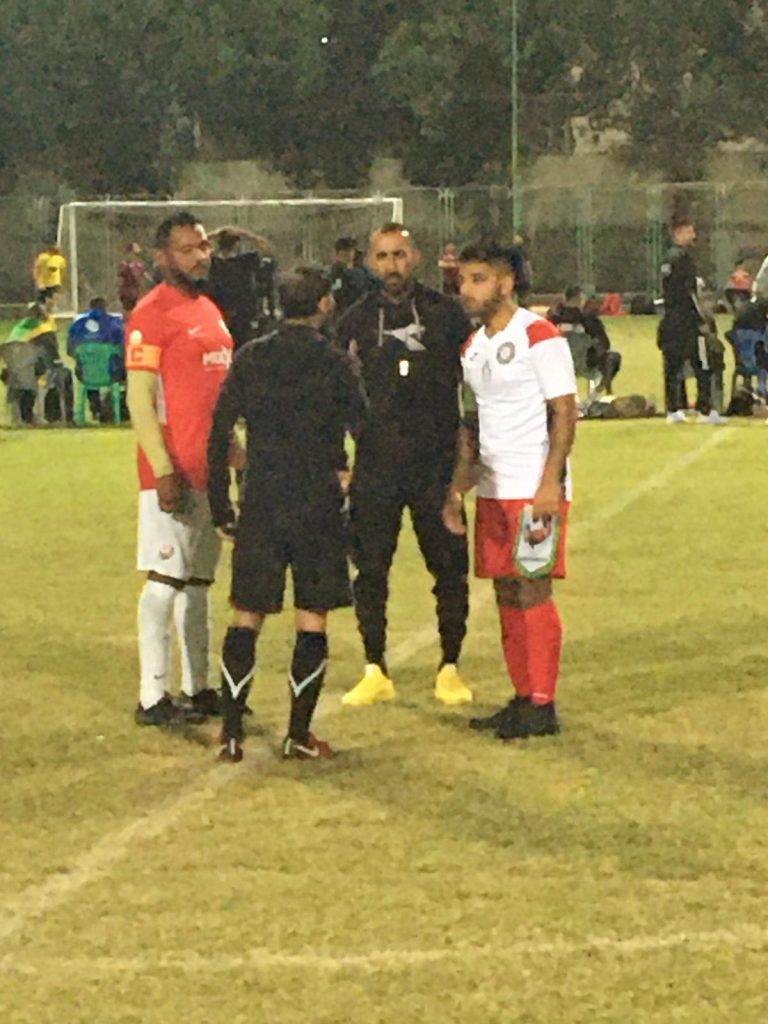 The Boxing Day fixtures ended with Stanmore B playing against Winnipeg Afghan. The fixture ended 0-0.

The group tables after day 3 were as follows: 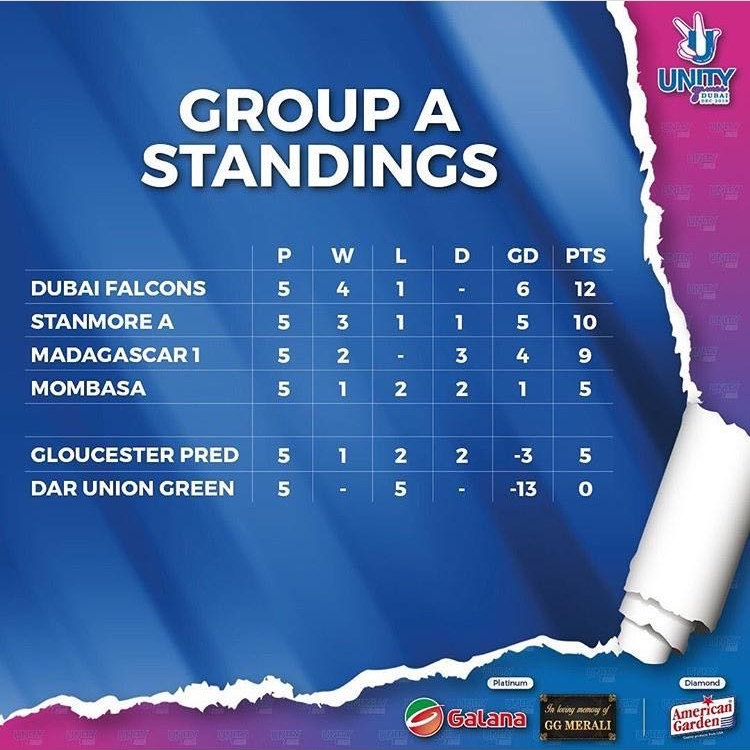 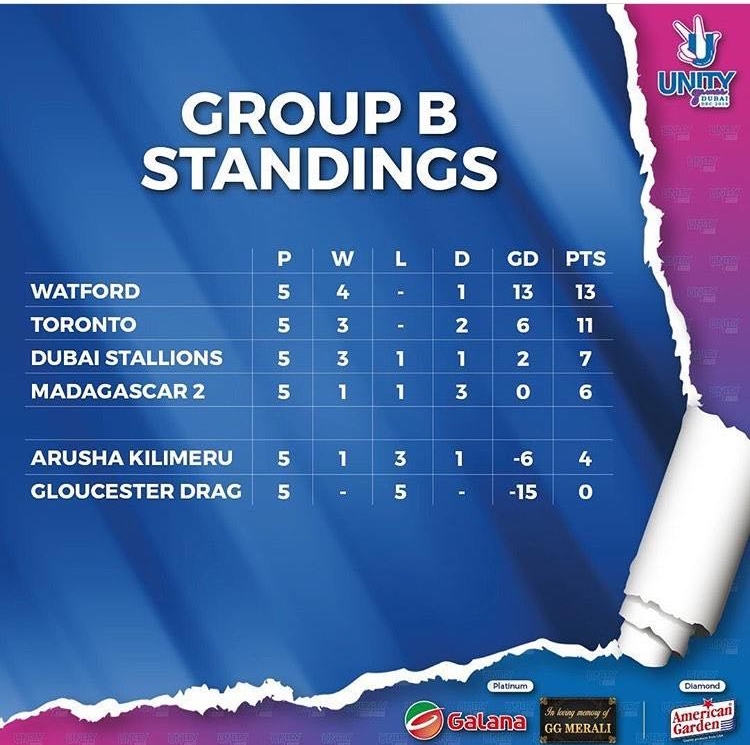 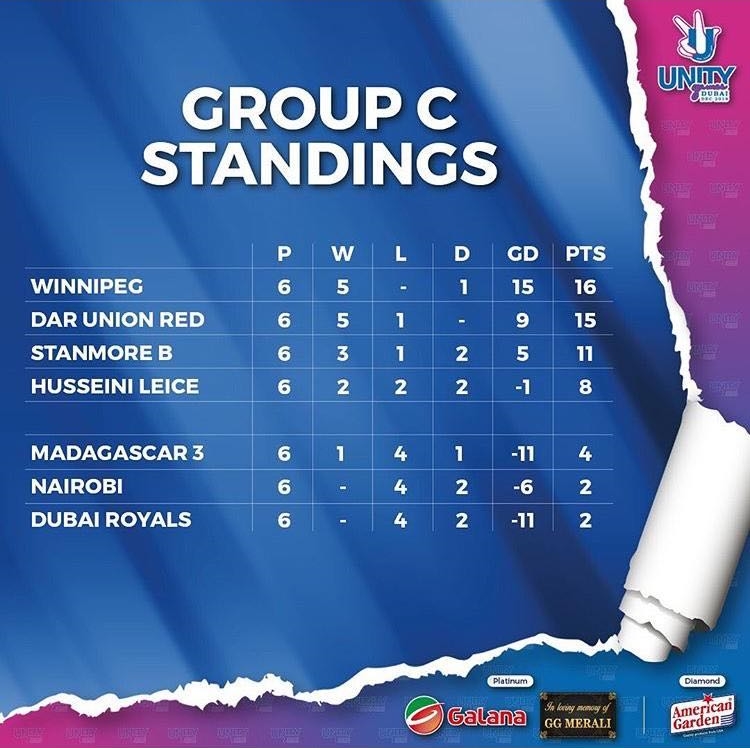 Stanmore A and Stanmore B were placed in the following groups as they progressed to the next stage of the tournament. 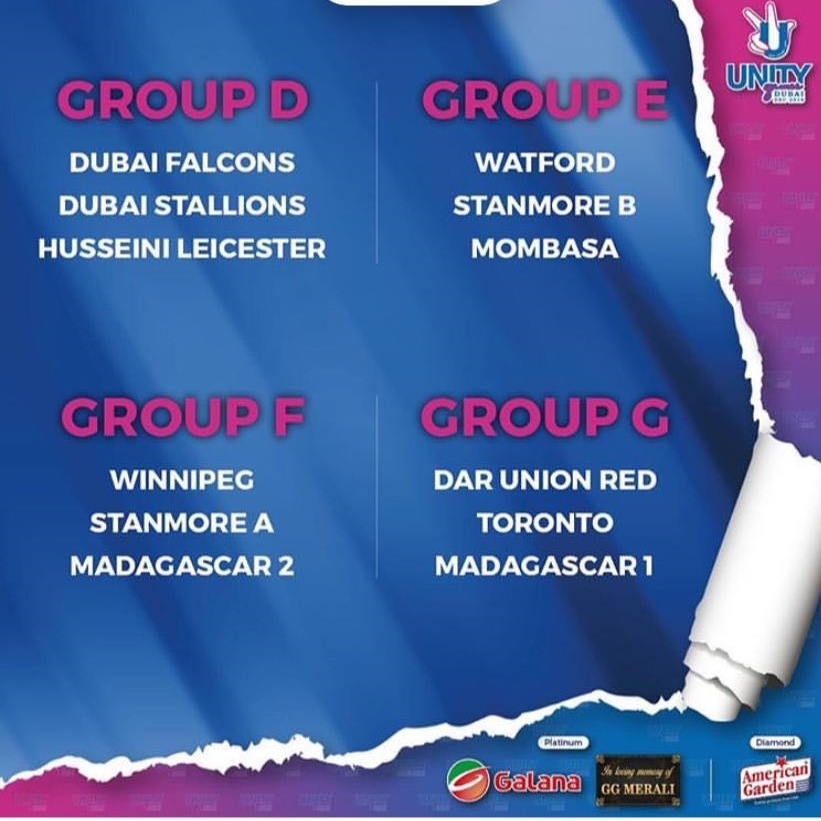 The second Round of Football Fixtures to be played today. All times are local times: 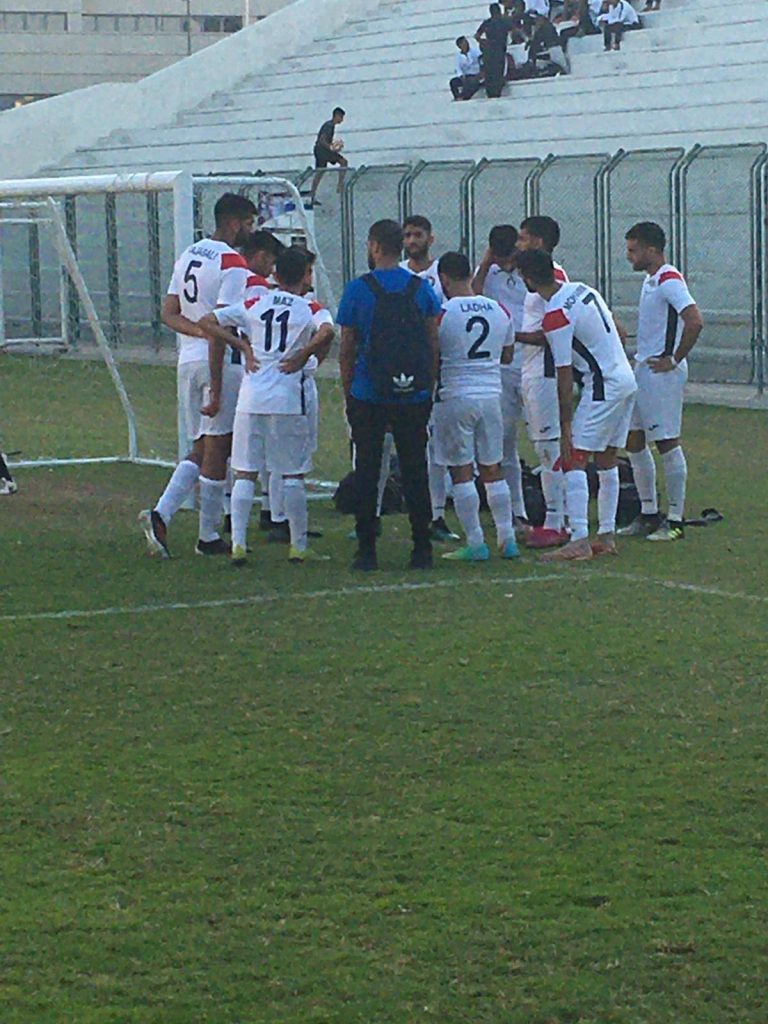 Stanmore B started with a win in their first Second Round fixture against Mombasa.  A penalty separating the two teams.

Stanmore A tried to get back on track with their Second Round fixture against Madagascar B. This is exactly what they did with a close win and a missed penalty.

Stanmore A 1 Madagascar B 0

The day ended with Stanmore B losing to a very good Watford team.

The final standings after the Second Round stage: 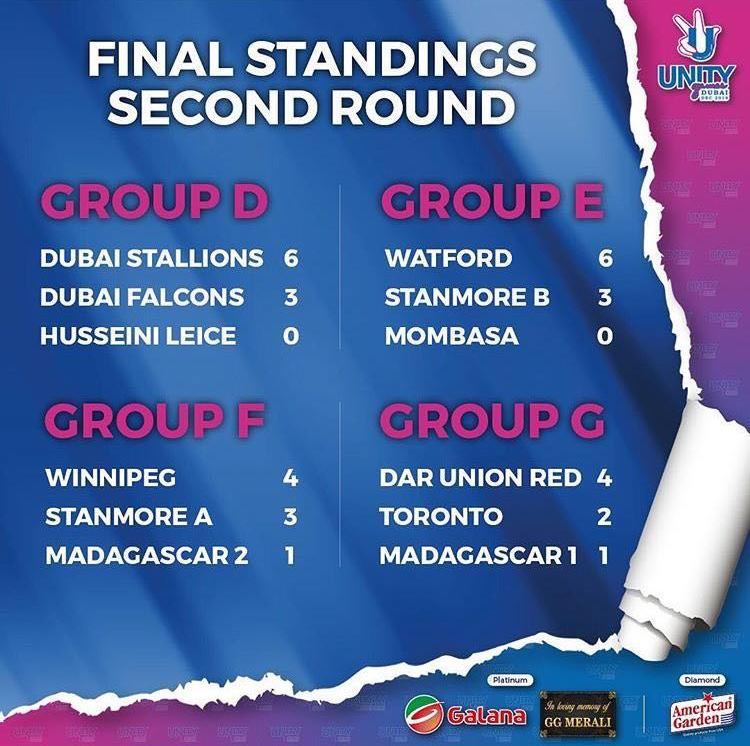 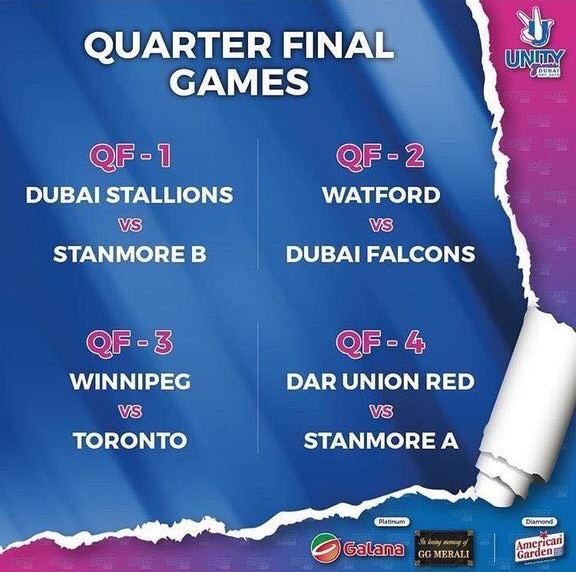 Stanmore A v Dar Union Red was a nail biter with the East Africans taking a 3 – 1 lead. With only minutes left Stanmore A clawed back the deficit with two smartly taken goals include a last minute free kick from Hussein Gulamhusein to make the final score 3-3.

Early in the extra time Stanmore A continued with their never die attitude and with another goal from Hussein Gulamhussein with a hat-trick of goals to make it 4-3. What a win with our SJ Chair capturing the euphoria straight after the match. This can be seen here:

Unfortunately Stanmore B could not join the A team into the semi finals after losing 2-1 to a very good Dubai Stallions team.

Unfortunately Stanmore A after another close encounter were undone by a single unlucky goal and Stanmore’s journey in Dubai comes to an end.

A big shout out to the Stanmore squads for their efforts throughout the tournament and we look forward to seeing them back and representing Stanmore again!