After an intense warm-up the team were all hyped to carry on the recent good form and add another win to keep the momentum up. 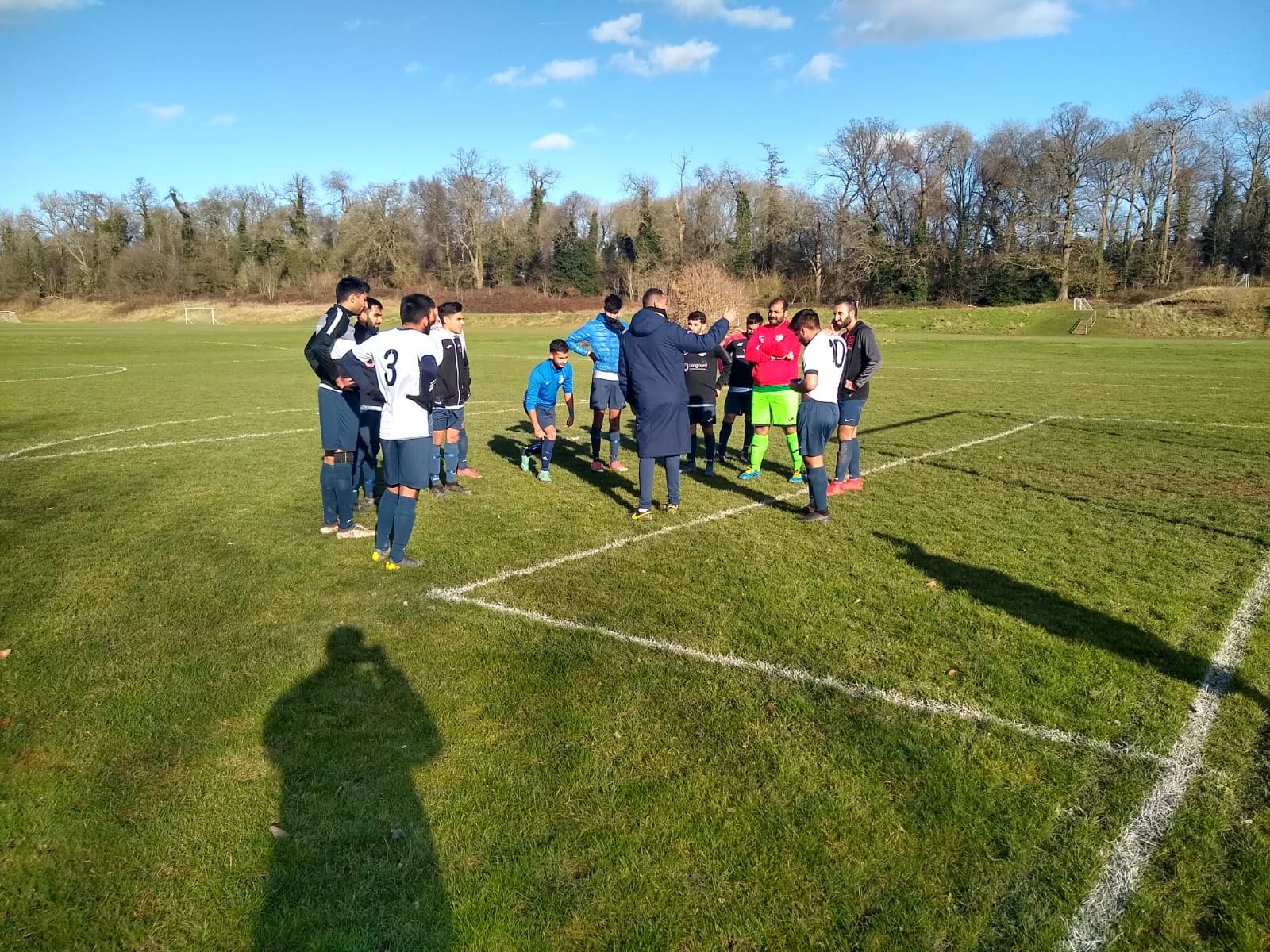 Having succumbed to Hinton 5-2 last time out, where their pace and powerful running was the difference, SJ started the game cautiously.

Both teams getting to grips with a bobbly muddy pitch, with chances at a premium.

After a scrappy first 10, SJ got into the game. Gibran pulling the strings in midfield, Mutz alongside adding his thrust and guile opened up space for Maz on the left, and Amuz and Yaseen upfront.

With the high press working a treat, SJ had Hinton where they wanted. After a warning long ranger from Amuz missed the goal, he tried again. About 25 yards out, slightly to the left of the “D” he sent a curling dipping shot with his instep, seemed destined for row -Z until the wicked curl took hold, the ball nestled in the top corner. Such a stunning finish, the world stood still trying to digest what we just witnessed. 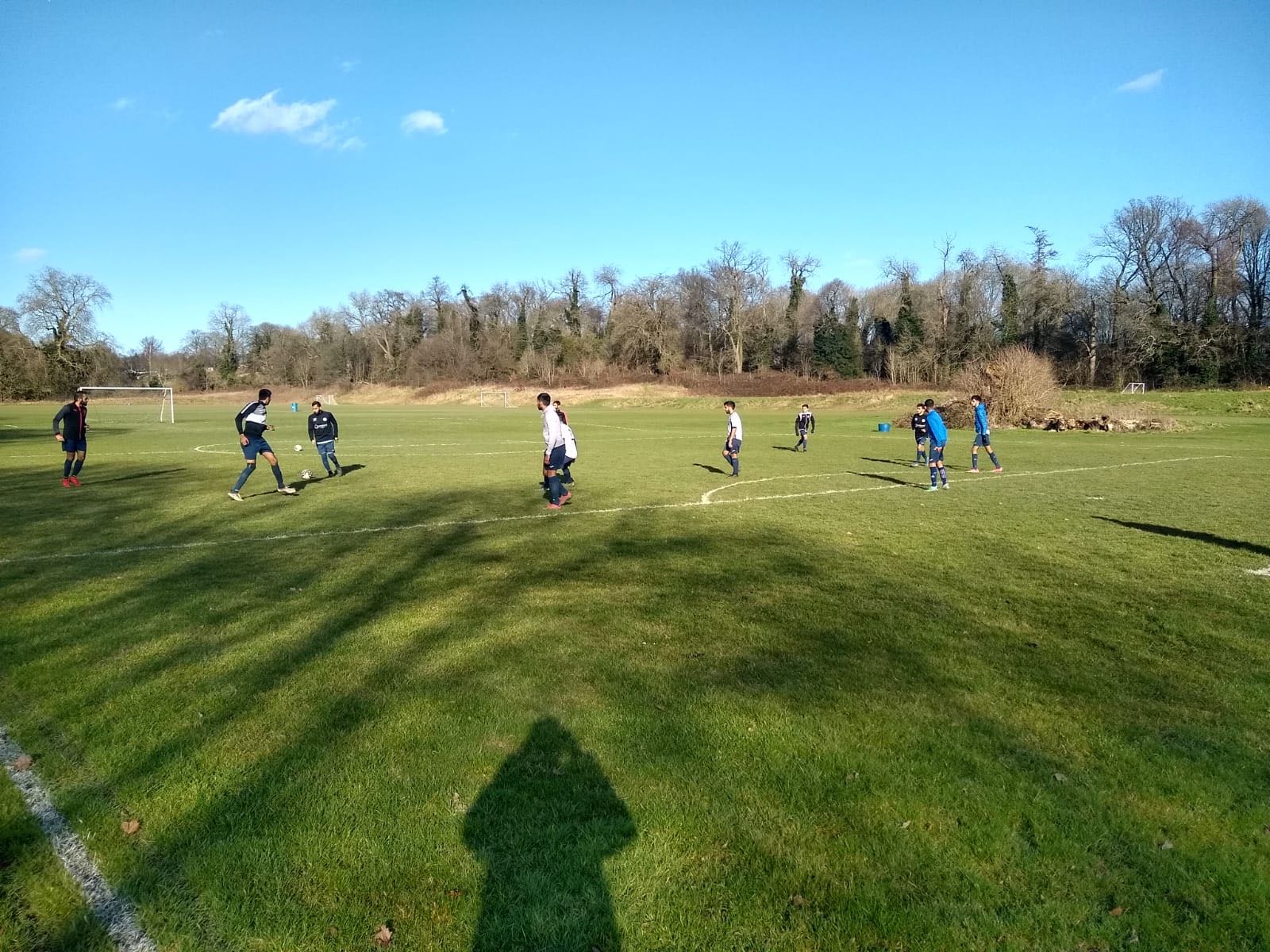 Hinton was at 6’s and 7’s. Yaseen leading the line giving their defense a tough time. He was relentless all day.

He got his rewards with two quickfire goals.

The first a brilliant team goal, high press, quick passing..Gib feeding Amuz, flick over a static defense on to an onrushing Yaseen to smash a first-time volley past the comatose Hinton GK.

Our third, Hussein Abdallah and Mahdi Hemraj superbly controlled and neutralized the potent Hinton left side got a foothold in an attacking sense.

This dream period became the stuff of legend, as Mutz who showed a totally different side of his game… hard in the tackle full of hard selfless running found space on the right, cut in at the edge of the box, a low curling shot nestled inside the box. Finishing of the highest order from SJ making use of the chances they created. 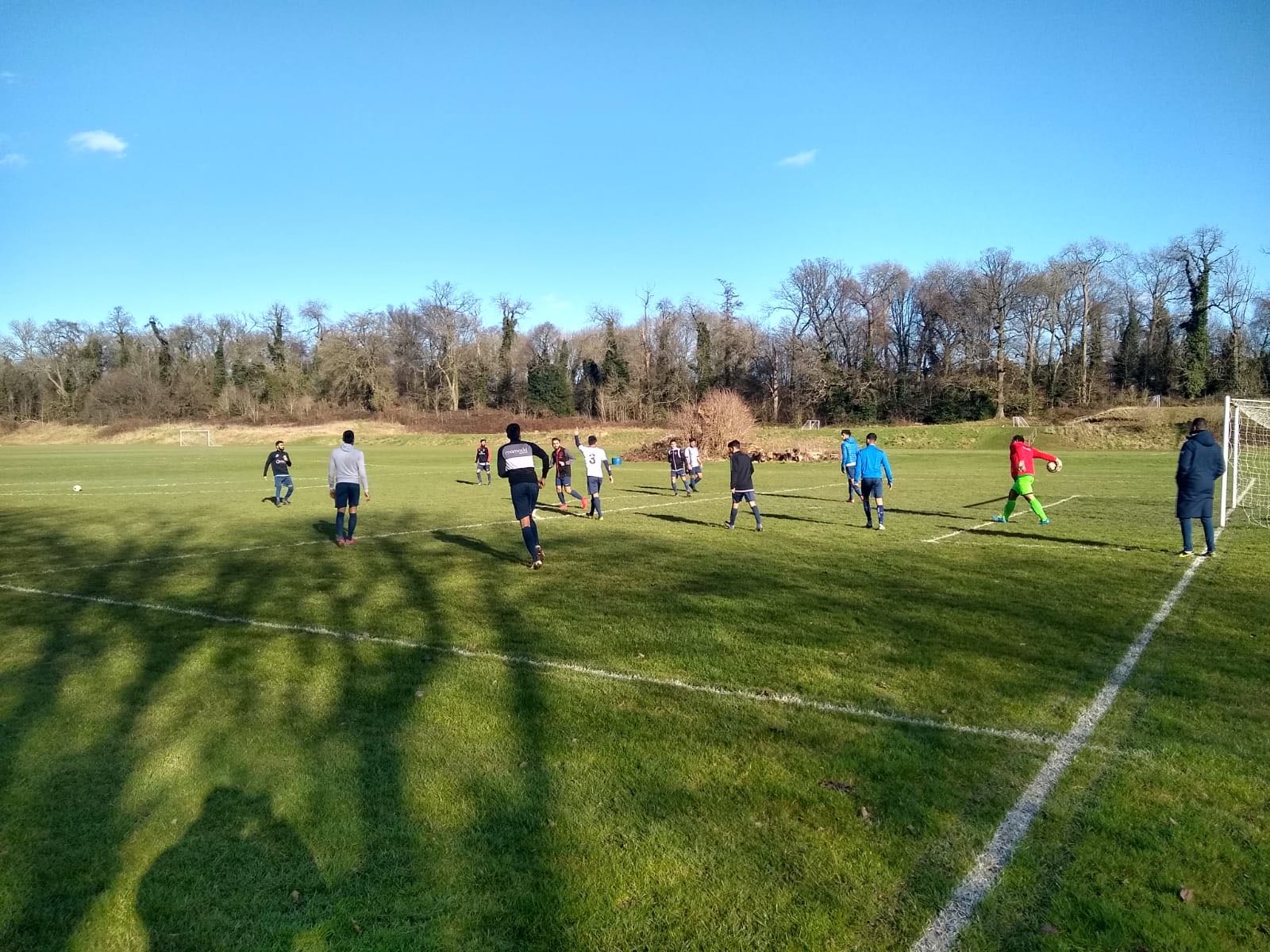 4-0 down, 25 mins on the clock, there was plenty of time left for Hinton to stage a comeback. They showed some character pushing SJ back.

Captain Hussein and Rosh stood strong at CB repelling any long balls, helped out ably by the full-backs, Maisam, Hussein Abdullah and Mahdi Shabbir when he came on as a sub.

Hinton resorted to long-range shots, their best chance two freekicks, that were meat and drink for Taus.

One slack bit of play at the edge of the area saw a low drive hit keeper’s legs and bobble up. An instinctive flick of the left foot from Taus saw the danger averted away from onrushing forwards. 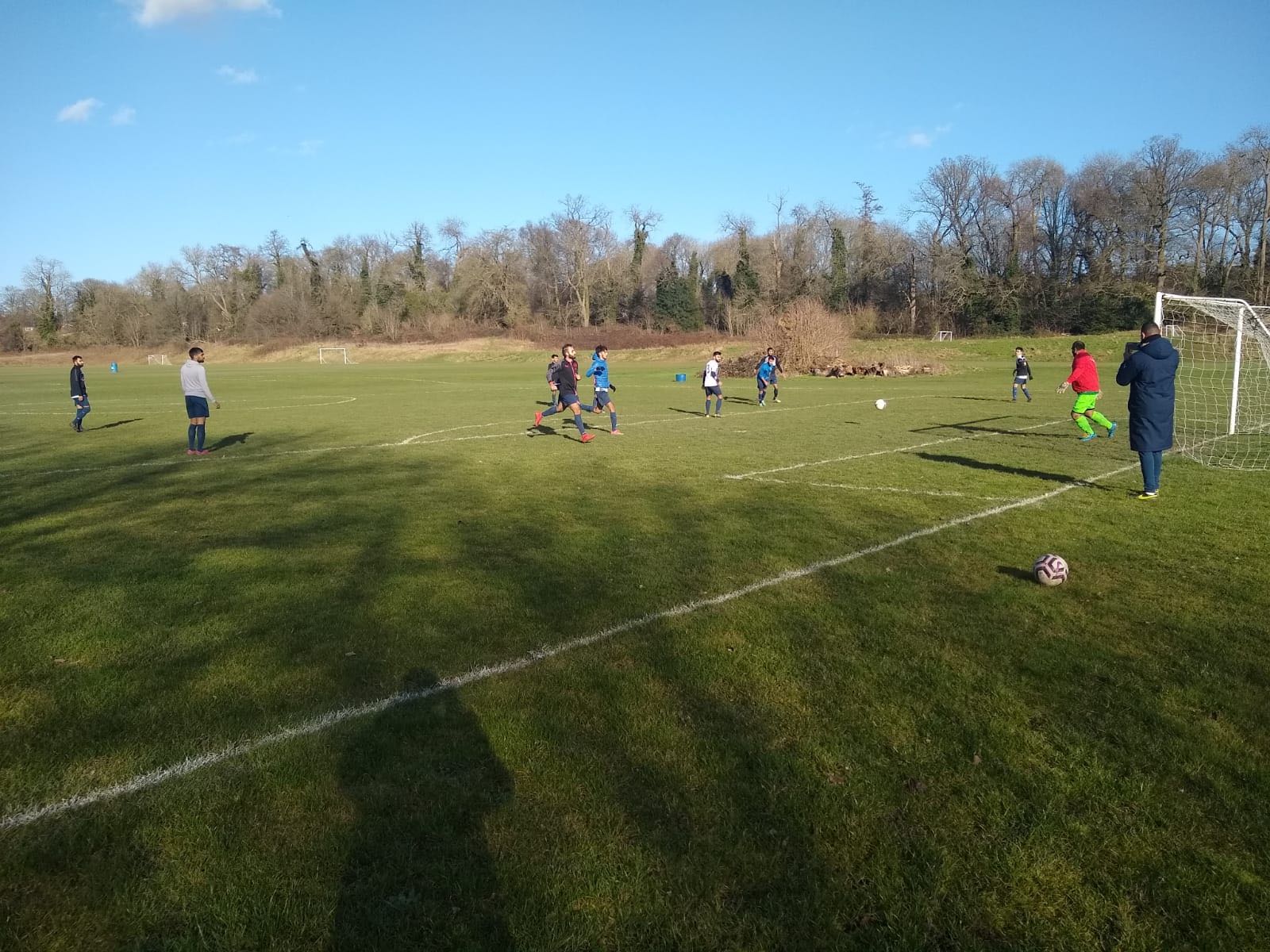 The second half started like the first finished, Hinton pressing for the one goal that would provide some impetus.

One heart in the mouth moment came when a speculative high ball in the box was missed due to the low sun by Taus, only to be rescued by the combined force of the back four.

This encapsulated the spirit SJ showed all afternoon

Mistakes were covered by the collective togetherness of the team.

With the first 15 mins done in the second half, Hinton’s spirit was broken. They did all they could for zero rewards. This opened the game up for SJ.

Yasin and Mahdi Hemraj combined with the tenacity to dispossess the Hinton Left-back, to cross to an unmarked Amuz.

A comedic slip saw him miss the open goal, this wasn’t to stop him. Whilst still on the floor, slipped the ball to a composed Maz, one-touch to settle.. top bins from 10 yards..5-0.

With Hinton now resigned, SJ showed great professionalism. Like hunters waiting in the grass, we waited for them to overcommit… knowing we had the running the pressing and skill to put the game to bed.

A nice move following a throw on the right saw the superb Mahdi feed Yasin to cross to Amuz for an easy tap -in. 6-0

Last 10, the game drifting, we were again left in speechless awe by Amuz.

A speculative ball over the top deep into the Hinton left-back area, Amuz chases, beats the keeper to the ball.. facing the corner flag at a ridiculous angle, he swings his foot, ball trickles into the empty net. Absolutely sublime. What a way to wrap up the win with his hattrick.. 7-0. 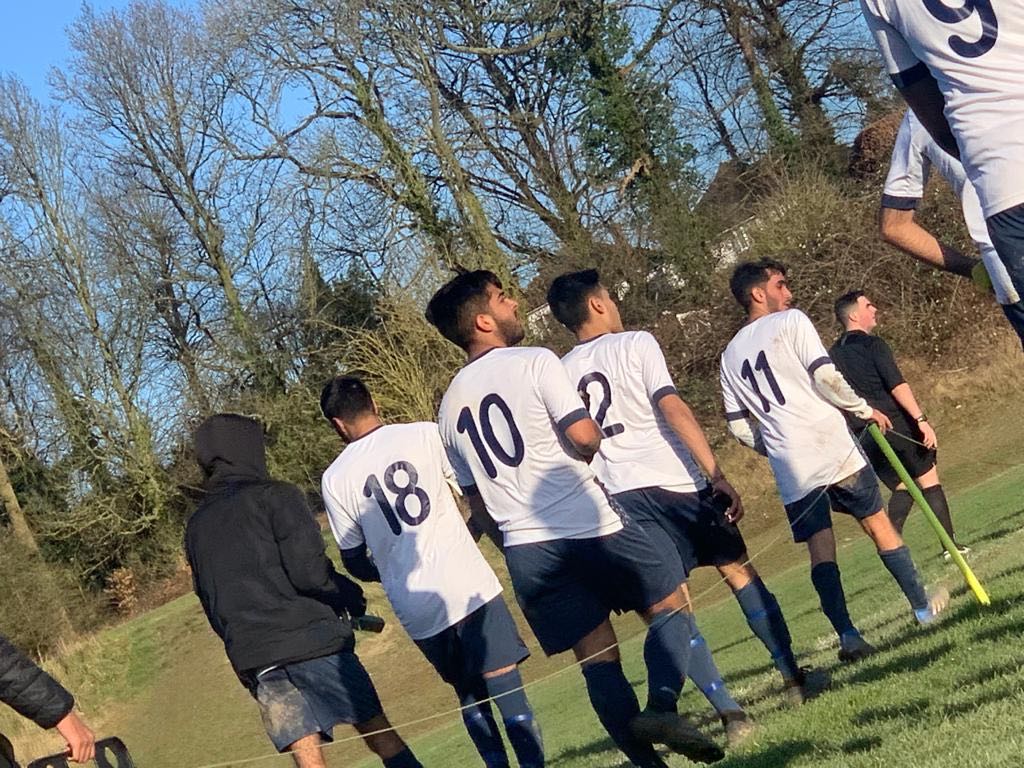 The game trickled to an end, SJ buoyant. To a man, all 12 players had a big hand to play.

7 goals and a clean sheet. Couldn’t have asked for more.

Captain Pirbhai commented post-match. “This is the standard we need to reach weekly to keep the momentum going”