Bitterly Cold and foggy morning in Little Chalfont, the boys huddled in the centre circle arm in arm with the opposition to impeccably observe a minute’s silence for Remembrance Sunday. 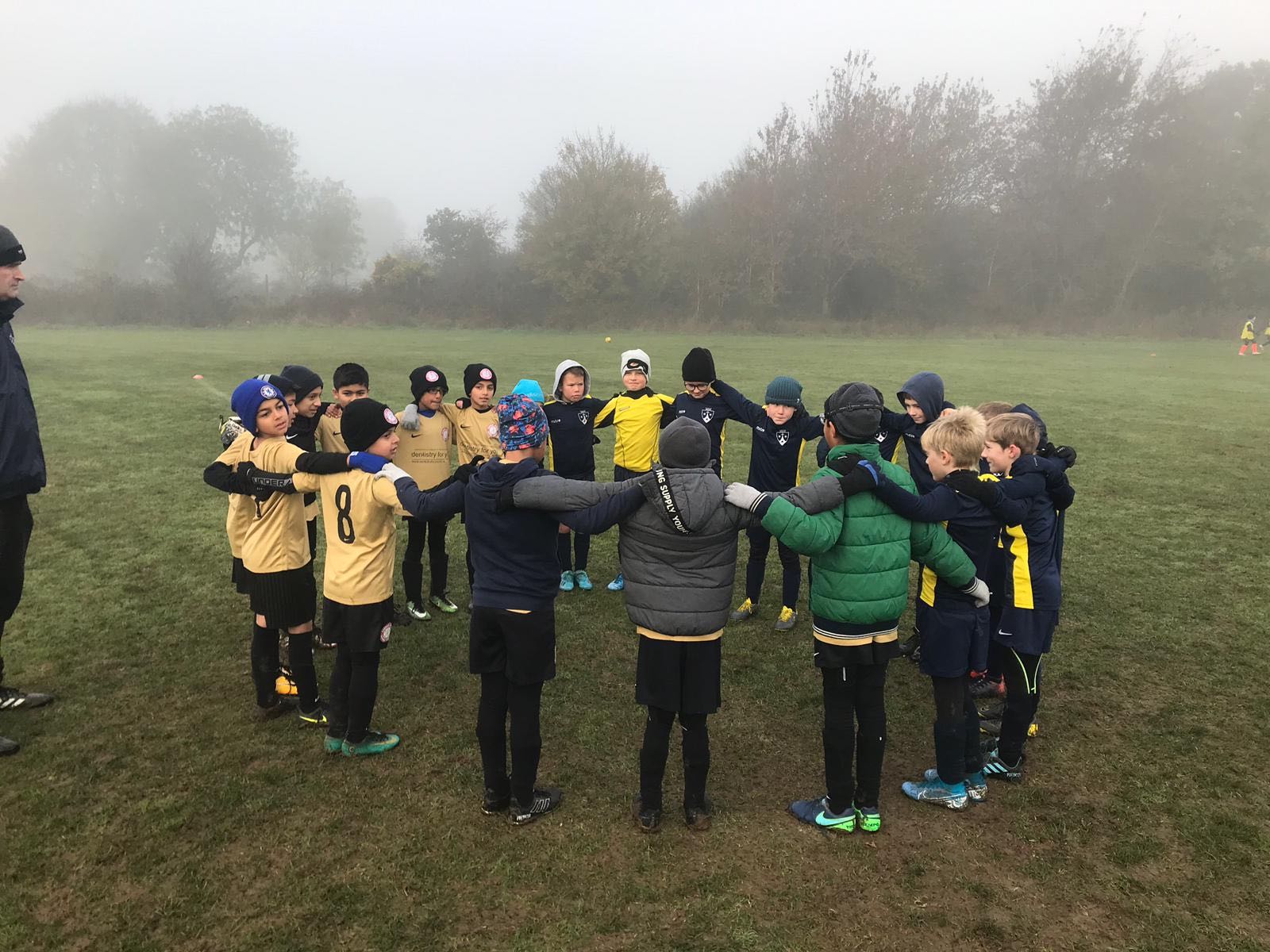 When the action began, Eagles were on the front foot immediately winning a corner.  Ali Nurmohammed takes thee corner with Zain Dharas meeting the ball with his thigh, missing the goal narrowly.

Avengers on the first attack tried a shot/clearance from distance which Amaar Hussein Lalji gathers with ease.

The early exchanges were even with Aadam Merali and Jaabir Merali in defence tidying up every loose ball and distributing to the midfield. On one such occasion Abbas RJava I wriggles free from his marker and finds a through ball to Ali Nurmohammed who’s shot is stopped by the Avengers keeper.

The pattern of play continued and this time Hassan Valjy’s through ball finds Abbas Rajvani who dribbles past the defender and shoots high past keeper.

Avengers try to hit back and a deflected shot from Avengers make Amar Hussein Lalji leap into action to prevent a corner. Now it was time for Eagles to attack with great work by Zain Dharas who puts Abbas Rajvani through on goal but was fouled just as he shaped to shoot. The referee awards a penalty. Zain Dharas steps up and slots it away for  0-2

Eagles coaches make some subs and the action continue with a great Avengers cross gathered by Amar Hussein Lalji in goal.  Jaabir Merali and Mikhial Rashid now work together in defence to break up counter attacks as Eagles hunt for the 3rd.  Zain Dharas wins a corner, the resulting delivery pings around in the oppositions goal mouth and Zain Khatau steps in to put away the loose ball for 0-3

Avengers look to hit back quickly and Mikhial R in defence makes a strong block from a rasping shot, the loose ball is followed up with another shot bringing about a smart save from Amar Hussein Lalji

With Eagles having a significant goal advantage, Avengers were allowed to field an additional player. Eagles had a goalkeeper change with Amar in defence and Mikhial in goal.

Avengers now having a man advantage made the numbers count on the counterattack when Eagles defence was found short-handed.  MiKhial finds himself one on one with Avenger striker but rushes of his line and blocks the shot with his shoulder

Zaki continues to work hard and runs free on the left, but his shot is saved by the Avengers keeper.

As Eagles continued to search for the fifth, they were always open to the counterattack, but Amaar was on hand to produce a great sliding tackle preventing an free run on goal.

Zain D wins free kick on the edge of the box.  He gets up and takes it.  The strong shot which clears the wall, is on target but the Avengers keeper saves with his legs.

Both sides continue to have chances, Ali dribbles and hits the post with a smart shot, Abbas’s shot is saved by the Avengers keeper after a strong throw in from Aadam M.  And a couple of Eagles corners resulted in goalmouth scrambles, but the Avengers keepers stayed strong and gathered on both occasions.

At the other end of the pitch the Eagles keeper was also kept busy, the Avengers striker had a couple of one on ones. One being poked wide, the other shot had Mikhial R beaten but not the cross bar.

The final minute of the game saw a fantastic run by an Avenger who dibbles past 2 Eagle defenders and strikes it hard, but Mikhial R stays big and strong in goal and blocks the shot to preserve the clean sheet.

The game comes to an end St Joseph’s Avengers 0 – 4 SJFA U9 Eagles.